P2P | 13 July 2019 | 92.72 GB
CinePerc is the World's Most Composer-Friendly Percussion library, spanning orchestral, auxiliary, ethnic and larger-than-life rhythmic instruments. CinePerc was recorded at the SONY Scoring Stage in Los Angeles, and mixed by master engineer Dennis Sands. CinePerc is four libraries in one, containing all content from the original CORE, PRO, EPIC and AUX libraries.

WHAT'S NEW IN V1.2
MERGING PRIOR LIBRARIES
CinePerc as a whole is now represented by one library, rather than four (Core, Pro, Aux, Epic). All instruments are clearly organized into a new folder structure which helps the user instantly identify which type of sound they are looking for (for instance Metals, Melodic, Ethnic, etc.). The original instruments have also been preserved in their own folder labeled '08 LEGACY'.

KONTAKT PLAYER COMPATIBLE
CinePerc does not require you to purchase any additional sample playback software, and is licensed to work with Native Instrument's free Kontakt Player. Now all you need is a sequencer like Logic, Cubase, Digital Performer, LIVE, or Pro Tools, and you'll be up and running.

RE-MAPPING
The entire line of CinePerc instruments have been remapped in order to create a consistent and intuitive layout for the user. Non-chromatic instruments have now been centered around middle C on the keyboard, so the user knows instantly where to begin upon loading a new instrument and playing. Other small tweaks have also been added for ease of use, such as several instruments being split out to their own patch for clarity sake (for instance different mallet types, different snare drums, etc., now each have their own patch).

Team MAGNETRiXX | 08 November 2013 | 11.6 GB CinePerc AUX is an auxiliary expansion to the other CinePerc options that will expand your template along with your creativity. These samples were recorded along with the rest of CinePerc at the SONY Scoring Stage, and were also mixed by Dennis Sands. This expansion includes many of the other colors you’ll need in your percussion writing. It includes...

Team MAGNETRiXX | 06 November 2013 | 43.3 GB CinePerc CORE is the first of four components that make up our CinePerc library; the next installment of the popular “Cine” series that includes CineBrass and CineWinds. Like those libraries, CinePerc was recorded at the SONY Scoring Stage in Los Angeles, and mixed by master engineer Dennis Sands.... 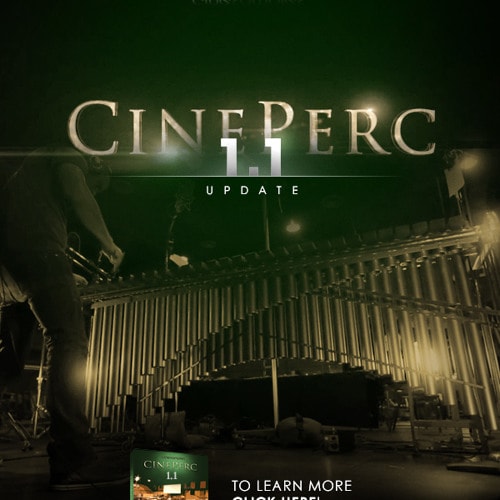 TEAM MAGNETRiXX | 08 November 2013 | 26.5 GB CinePerc PRO is an extremely useful part of our large CinePerc library; the next installment of our popular orchestral series that includes CineBrass and CineWinds. Like those libraries, CinePerc was recorded at the SONY Scoring Stage in Los Angeles, and mixed by master engineer Dennis Sands. This package includes many more percussion instruments for...