The G2500 is made from in-house developed proprietary and optimized virtual analog modules, to reproduce the unique and fat analog sound of the original, bringing it to your desktop. All the original control features from the ARP 2500 are there, and because you can save your carefully programmed patches, the G2500 is even better than the real thing!

Twelve different virtual modules also found in the original:
1002 Power Control
1004-P Oscillator
1004-T Oscillator
1005 Modulator Amplifier
1006 Filter Amplifier
1016 Dual Noise / Random
1027 Ten-Position Sequencer
1033 Dual Exponential Envelope Generator
1036 Sample & Hold / Random Voltage
1046 Quad Exponential Envelope Generator
1047 Multimode Filter / Resonator
1050 Sequential Mixer
A new 1102 I/O Control virtual module not found in the original
A virtual version of the 3001 Keyboard also found in the original
Play notes using 16 keys on the computer keyboard and selecting octave with two additional keys
Audio input from any system sound input device selected in the Preferences
Audio output to any system sound output device selected in the Preferences
MIDI input from any MIDI input device connected to the computer and selected in the
Preferences
Recognizes MIDI All Notes Off, Note Off, Note On, and Control Changes
Save pieces of audio directly to disk in WAV format by the push of a button
Setup is fully user configurable, in order to choose which and how many of each module to use
Choose between two skins, Vintage and Black
Option to display tooltips for many controls
Use patch cables for even more connections than possible using the upper and lower matrix
Load requester to load new patches from disk
Save requester to save your own patches
Patches are stored as text-files in directories on disk, to be easily manageable with operating system tools
Zoomable user interface to easily go between a full overview and a detailed view of modules and controls
Choose between windowed or fullscreen mode
Studio quality 24bit/96kHz audio in and out (*)
Audio is easily sent to e.g. a software DAW (Digital Audio Workstation) using software such as "Soundflower for Mac"
The G2500 is easily controlled from e.g. a software DAW using the IAC Driver found in the MacOS "Audio MIDI Setup"
Five banks to store patches in memory, which is a benefit when creating new patches
Choose between Even Temperament and Bach-Lehman Temperament
Toggle bandlimiting on and off to stay below the Nyquist frequency (half the sample rate of 96kHz)
An optional post-filter for more smooth acoustic transients

Audio is actually 32-bit floating point, and as values goes from -1.0 to +1.0, it is comparable to 24bit audio and is easily converted to 24bit by the operating system, if that is needed in the further signal chain.

The synthesizer sound is constructed in real time, responding to how the musician strikes the keys and interacts with the control knobs
Due to modern development of computer CPU technology, a precise simulation of an analog synthesizer is possible producing 24bit/96kHz studio quality audio output
A technique known as "bandlimiting" is used to keep the audio output frequencies below the Nyquist frequency of half the sample rate (96kHz) - so below 48kHz - to remove audible artifacts, for example when sweeping sound to high pitch
64bit summing is used internal for high quality audio output
High precision dial knobs with more than one billion individual positions for each, where e.g. MIDI controllers typically have 128 (7-bit) individual positions.
The combination of these techniques is also known as "virtual analog synthesis" and makes this software produce sounds very close to a hardware analog synthesizer with the benefits of the digital world (like much less noise and other benefits) 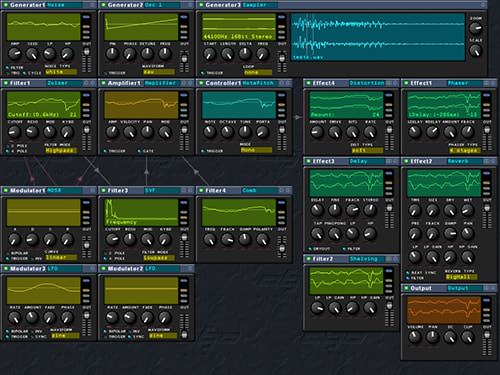 AiR | Feb 2014 | 522 KB Virtual Audio Cable software allows you to transfer audio (wave) streams between applications and/or devices. It creates a set of virtual audio devices named "Virtual Cables", each of them consists of a pair of the waveform input/output devices. Any application can send audio stream to an output side of a cable, and any other application can receive this stream from an...