P2P | 19 April 2020 | 48.47 MB PLATINUM For Xfer Serum The GOLD experience would not be complete without an…
BVKER Organic Trap Drums WAV

P2P | 17 April 2019 | 972 MB
While sampling the church organ in the town church I made this organ stop combination that had an ethereal quality.

I put all the other sounds aside for a while due to this vision: What about combining even more sound sources together? Like having a giant church organ with even more sound opportunities.

For some reason, while editing sounds I kept watching these pictures of arctic norwegian churches and spectacular mountains on Baffin Island. What was first maybe a more spacey sound idea tilted to northern lights, crystal clear lakes, sun reflections on icy landscapes etc. Now the ambience was set.

So the concept of Ethereal Keys is you having a giant keyboard creation with interconnected sound sources such as church organ, tonewheel organ, electric organ, harmonium, analog synthesizers, solo vocalist & choir, electric guitars and various wind instruments plus mark tree.

To match the arctic theme the sound ideal is not "authentic" by itself but rather more "frozen" in character. A bit like having a synth from the 90's but with much larger memory capacity and better PCM samples. The human voices, for example are not intended to sound "natural" but more like aural snapshots found under the arctic ice.

Please note: Some of the presets use the modulation wheel to gain access to more layers of sound and parameters. Always remember to check it out. The key range is also different across the presets. As the presets contain various layers edited individually, please remember that altering the knobs in the GUI will affect the sound as a whole.

The advanced Kontakt 5 user can of course edit the layers separately at will. Welcome to the musical permafrost!

SYNTHiC4TE | 05 December 2018 | 94 MB The organ used for this project is a Hammond L100 with a great Leslie. For a full sound the keyboard was sampled with all the bars at maximum level and the microphones not to close to the cabinet to get some air into the sound....

AUDIOSTRiKE 14/06/2015 | 931 MB We are proud to present our sampled pipe organ, a magnificent huge church organ where you can virtually pull out the stops in the interface, choosing between a fantastic selection of stops, combinations and tuttis. Ranges of each stop will be shown on the keyboard when activated, pedals low, and manuals higher, plus optional octave extention controls, just like on...

HEXWARS 19.02.2015 | AU/VST | 31.08 MB The initial idea for Blade was born out of the want to have more ‘human input’ into the sound. The classic synthesizer parts for modulation are LFOs and Envelopes. The ‘human input’ is the keyboard we play and controllers like pitch bend or modulation wheel. A XY pad is perfect for the human input, but it controls only the filter and volume... We found this... 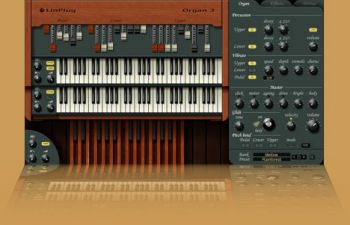