AUDIOSTRiKE | 23 April 2015 | 157 MB
This instrument is compiled entirely from re-tuned "bourdon" strings (drones) of a Polish Hurdy-gurdy. The original recorded Lira is normally tuned in C/G however, for this Kontakt library, each of its drones has been retuned and recorded in 24bit depth for more authentic sound.

All sounds in this third instalment of "Lira Korbowa - Authentic Polish Hurdy-gurdy" library are organically extracted from the instrument built by Stanislaw Wyzykowski - one of the pioneers of hurdy-gurdy revival. No preservatives or frozen imports here! All content in the series is captured by the set of three microphones:

* condenser - positioned above the instrument and essential to catch all those wandering overtones,

* piezo-ceramic - sitting tightly near the bridge and ensuring that this ancient wood is not vibrating in vain!

* silver bullet - roaming where necessary to get the most unique experience: from depths of the body to the hinges of tangent box!

The keyboard is divided into three zones:

Velocity layers controls the friction: from slow wheel turning when a string is barely making a sound to high speeds when string is almost losing its grip on the wheel!

Also, don't be surprised if some TOP velocities will 'stall' the string! That what's happening if wheel is turned too fast - a harmonic chaos I couldn't help to capture :) This and more sonic surprises inside - just like with a real hurdy-gurdy.

4 round robins - for more organic hurdy-vibe!
including all hurdy-gurdy grittiness! knocks, squeaks, imperfections
on average, 16 samples per drone notes, 8 samples per harmonic note
one single patch that cover it all
authentic sound without over-stretching the original recordings
Ever dreamed about your own Medieval Synthesizer? This is it.
I wish you all a lot of fun with the "burdDron"!
Until next instalment.

Developed in Kontakt 5.4.3 so you'll need this version or above to use this library.
Library will only load in 'demo' mode in the free Kontakt Player. 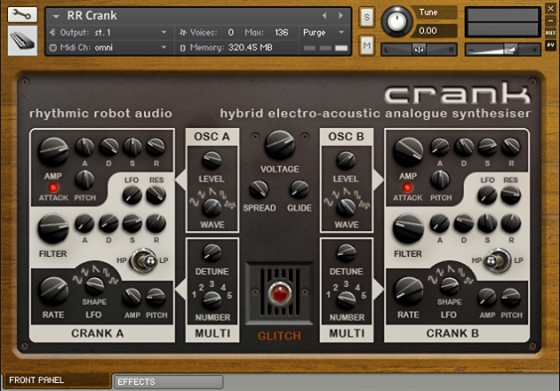 DISCOVER | 24 MARCH 2015 | 418 MB Crank takes as its basis and inspiration the raw, erratic, unstable, wonderful sound of the hurdy-gurdy – an Eastern European folk instrument built around a resonant soundbox, five or more violin-style strings, a wooden peg keyboard, and (most importantly of all) a rotating, hand-cranked wooden wheel. This wheel is rosined (like a violin bow) and scrapes across...