SONGWRITING.
Arrange, compose, change and rearrange – without leaving the software.

MIDI.
Comes with bass MIDI for a broad range of styles.

A BASS PLAYER.
Use drum or keyboard MIDI and have EZbass automatically create matching basslines.

GRID EDITOR.
Alter the performance or the subtler details of the MIDI using the built-in ‘Grid Editor.’

AUDIO TRACKER.
Audio to MIDI conversion based on the same technology found in Superior Drummer 3.

EZbass 1.0.5 is now available to download using the Product Manager or from the “My Products” area in your Toontrack account. Please note that version 1.0.5 is required for the support of EZbass products released from this point forward (Q2 2020).
NEW

Added support for authorizing and using EBXs (EZbass sound expansions).
The CCs for modulation, damping and sustain can no longer be used for MIDI Learn.
Tooltips for GUI elements, e.g. buttons, will no longer appear after you have clicked on the element (until you move the mouse away from it and back).

When exporting to audio, (2)/(3)/etc. is automatically appended to the file names if the files already exist.

In Tap2Find, a new button lets you search while keeping the active filters. The main search button clears the filters.
Buttons and knobs in Tap2Find have been rearranged a bit.

“Smart Snap” has been changed into two separate options: “Magnet Snap” and “Snap to Notes.”
Added a header to the absolute/relative section of the “Snap to Grid” submenu of Options.
Added a “Timing” header to the Note menu.
The note pitch curve is now drawn in white instead of green.

Added support for dragging audio from Cubase.
Added snap to grid/transient settings.
Slide note selection area has been adjusted so you need to click on the actual notes to select a slide.
Moving notes with keyboard shortcuts now triggers preview.
Added selection rectangle in the regions view (Amount of Notes) for selection of notes.
Pressing backspace/delete can no longer remove a region. A remove region button was added instead.
Shift-click in Amount of Notes, Articulations and the grid view now selects all notes in between the clicked one and the latest selected.
Added grid lines to the velocity and amount views.
The audio input signal in standalone can now be seen on the audio LED in the tracker (when recording or preparing to record).
Audio waveform drawing is faster now.
Selecting with rectangle in Articulations and Amount views is faster/smoother now.

The attack sounds are now also included in the palm mute.
The attack sounds now also follow the selected tuning.
After loading a preset, the cent tuning was reset, although the GUI value was correct.
The main tabs were put on top of the MIDI Learn text and shadow.
If the GUI is closed while a modal dialog is shown, the faded background no longer covers the interface when the GUI is opened again.
When a moved EZbass sound library folder is located by the user at startup, the current project (the loaded project or default project) is now applied to the found sound libraries.
Improved parsing of multi-track MIDI files.

Fixed some crashes on the song track when opening menus in certain scenarios.
Follow Host should no longer incorrectly get turned off with the claim that the same MIDI is coming from the DAW as is present on the Song Track – if such MIDI has been deleted from the DAW.
When exporting to audio, the cancel button did not work as intended when sounds were being loaded.
Dragging from the song track outside the plug-in window and back made a copy instead of just moving the dragged item(s).
Some minor adjustments/fixes to the GUI on the song track and the minimized song view.
On Mac, ctrl-click now works to open the song track context menu.
If a MIDI loop was added from the Audio Tracker, the notes would sometimes not be visible until the user did something to make the loops be redrawn, e.g. zoom.
Auto-transitions won’t be applied if there is no following chord to transition to.
Adding a MIDI block with damping after one without would sometimes add damping to the preceding block as well.
Changing bass note on a chord could make the bass note end up in the wrong octave.
Correcting a chord to a different bass note could end up moving notes instead of just correcting.
The “–” does not show up on a chord if the current notes fit into the current chord (like D notes on a D chord in C major).
Importing a MIDI file to the song track now also creates chords and a song part.
The song track tempo text editor will no longer show the tracker tempo if the tracker is the player in focus.
The “Drag groove here” text could become visible when undoing stuff on the song track.
The menu item “Add Chords to Chord Track” is now disabled if no chords can be added to the chord panel.
Changing groove in Replace MIDI mode could cause a clicking sound.
When copying or inserting a new MIDI block on the track, the copied block could get the wrong damping values if no damping values existed on the track.
Time signatures, key signature and tempos were not copied when duplicating a song track.
Transitions were removed when a loop was moved or copy/pasted on the track.
Chords in recorded MIDI were always analyzed in the key of C.
Notes on the red record block were not always visible when jumping back in the timeline while recording.

Changing Amount no longer causes a crash when a chord begins just before the end of a bar.
Adjusting Amount could lead to all CCs being duplicated on the selected MIDI blocks.

Replace MIDI mode now shows the selected card in orange.
The “Replace MIDI” and “Export to Current Song Track” menu entries are now disabled in Replace MIDI mode.
The “Recent MIDI Files from Project” list in the “Select MIDI File” menu was saved in projects but not loaded correctly if the paths contained special characters.

Inserting a CC value when no MIDI is available on the song track caused a crash.
Right-click-drag in the Pitch editor no longer causes a crash.
Editing one CC curve would remove all other CC curves.
The vertical insert lines when using pen tool didn’t sync between grid and CC editor (with snap on).
Inserting CC nodes didn’t always insert them where the vertical line suggested (with snap on).
The vertical line that follows the mouse when the Split Tool is selected didn’t always show correctly where the split would happen if you’d click on a note (with snap on).
Extending a MIDI block in the grid is only done as far as necessary, not a bar extra.
On Mac, cmd-alt-click to split a note did not always work correctly.
Legato was sometimes incorrectly applied when polyphonic selections were copied.
Loading a project by double-clicking a project file and then browsing for missing libraries did not load the requested library in the project.

Fix for user-added notes sometimes disappearing.
A tempo map is now included when dragging MIDI from the tracker.
The tempo text is now updated continously.
Regions are no longer removed when recording over a previous recording.
Various graphics fixes to zooming, grid lines and numbers.
Various fixes to things not being updated when undoing.
The waveforms are now drawn on top of the supporting grid lines.
The tracker playhead and loop area now snap only to the time bar.
The play button in the tracker was enabled even though no audio input sender was connected.
The tracker insert/remove line was not drawn correctly in scales other than 100%.
The tracker grid could stay small if zoomed out and the window was resized.
The preview MIDI DnD block was not updated when loading a project or editing in the tracker grid.
Recording again in a tracker file that has sample rate other than 44100 Hz now works as intended.
Drag and drop of audio from Cubase should now work with any special characters in the file names.
Changing octave with shortcut now plays preview.
Preview note off times are now reset so that changing back to a note that was recently played does not cut off that note early.
Recording again and thereby making the audio longer did not create any notes after the original length.
The “Recent Files from Project” list in the “Select Audio File” menu was not cleared when a project was loaded, meaning it could grow very large and have duplicate entries.

Custom keyboard shortcut bindings that are displayed with non-ASCII characters (for example some language-specific characters) would not be correctly displayed after restarting EZbass. If you have such bindings from before, you can fix how they are displayed by rebinding them.

Team V.R | 16 October 2019 | 272 MB Building on the legacy of its predecessor, Superior Drummer 3 was redesigned from the ground up to introduce a completely new and improved workflow, countless added features and an unequalled amount of raw sound material. With Superior Drummer 3, you are in total control. Welcome to the future of drum production.... 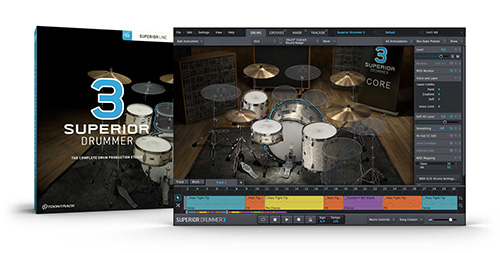 P2P | Dec 09 2017 | 286 MB Building on the legacy of its predecessor, Superior Drummer 3 was redesigned from the ground up to introduce a completely new and improved workflow, countless added features and an unequalled amount of raw sound material. With Superior Drummer 3, you are in total control. Welcome to the future of drum production....

Toontrack Superior Drummer 3 v3.0.2 WiN incl.Patch 286 MB Building on the legacy of its predecessor, Superior Drummer 3 was redesigned from the ground up to introduce a completely new and improved workflow, countless added features and an unequalled amount of raw sound material. With Superior Drummer 3, you are in total control. Welcome to the future of drum production....