AUDIOSTRiKE | 29 August 2015 | 1.7 MB
This Hammond AutoVari rhythm unit was originally built into an old old Hammond Dolphin organ from the 1970s. Although it only had 7 rhythm buttons, each one had 4 variations so there were 28 rhythms in all. The unit itself included circuitry and controls for the organs auto-accompaniment section but no circuit diagrams or schematics were available to see how to access it.

Sounds
The FK9 includes isolated samples of the 7 analogue sounds of the AutoVari. Each sound has been sampled 8 times and is chosen randomly within Kontakt. They are, or course, accessible via a keyboard or DAW sequencer also. The sounds are in 24-bit 44.1KHz wav format.

Rhythms
Each of the 28 rhythm patterns have been re-created for Kontakt. They are not sampled loops, rather they are sequences that trigger the individual sound samples when needed. This is how a real drum machine works, only here we use samples instead of a sound generator circuit.

Setup
The Setup tab offers greater control over how the FK9 sounds and operates. There are volume, pan and tune controls for each sound. Incoming MIDI notes can be mapped to any rhythm. Random tune and volume controls add a little human element to the sounds.

Inside
Here's what the AutoVari looked like inside. There was no case of course as it was enclosed by the organ cabinet. Some of the controls you see here were for the organs auto-accompaniment section.

AUDIOSTRiKE | 15/05/2015 | 10 MB The Forgotten Keys FK8 Kontakt instrument is based on the Maestro Rhythm King MRK-4 analogue drum machine from the mid 1970s. Whereas the MRK-1 and MRK-2 models were transistor based, the MRK-4 used inductor coils, or tuned tanks, to produce the drum sounds. It actually had fewer sounds and rhythms than the previous models, but was less noisy (judging by the...

AUDIOSTRiKE | 23/08/2015 | 4 MB All the names dotted about on the front panel and serial plate of this early analogue drum machine denote it as: Ace-Tone, Bentley, Rhythm Ace Full-Auto FR-3. Quite a mouthful! I’m going to stick with FR-3 from now on. The FR-3 was a very similar looking machine to the Korg Mini-Pops 3 in that it had the usual range of preset rhythms plus a selector knob that... 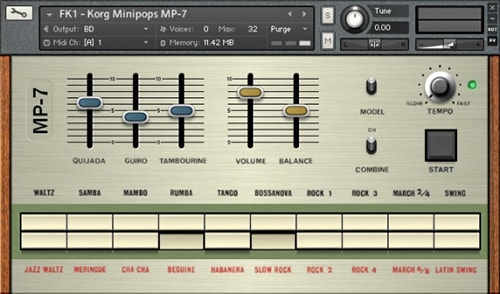 AUDIOSTRiKE 19/02/2015 | 9.7 MB The Forgotten Keys FK1 Kontakt instrument is a virtual Korg[1] Mini-Pops 7 analogue drum machine from the 1970s. This machine was also branded as the Univox SR-95[2] and Contessa Mini Pops. As a top-of-the-range model it featured 15 sounds and 20 rhythms. The drum sounds were produces using inductor coils (sometimes referred to as tuned tanks) and gave a lovely...

TEAM MAGNETRiXX 23 August 2014 | 4 MB The Forgotten Keys FK14 Kontakt instrument is based on the 2nd incarnation of the Hammond AutoVari 64 rhythm unit from the early 1980s. The official model number was 101300 and it replaced the 101100 model. They were very similar in function, but the later model was very different inside and added a rhythm break feature as well as a programmable variation...