FANTASTiC | 15 May 2016 | 3.98 GB
Forks is a unique Kontakt 5 instrument that uses a deeply programmable interface to combine both acoustic and synthetic elements to create sublime new sounds for composers and sound designers.

At it's heart Forks is based on an extensively sampled collection of scientific tuning forks that have been used and abused and played in unique and creative ways, all captured in pristine 96kHz clarity. A plethora of thuds, rattles, jangles and buzzes all make appearances here in addition to the traditional pure ringing tones tuning forks are known for. These acoustic samples were then heavily processed and twisted to produce companion sounds that can be layered and added to the acoustic elements along with raw waveform samples from an Arp 2600 synthesizer. This makes it possible to create anything from detailed electric pianos and vibraphone-like tuned percussion to otherworldly soundscapes and pads. The included presets take advantage of this diversity and showcase the breadth of sounds that are possible while being easily tweakable from the logically laid out front panel.

Forks features a dual layer interface with individually linkable sections that is an evolution of Particle Sound's original Carbon interface and affords considerable sound mangling power in an intuitive and straight forward way. Each of Forks 2 layers features dual sound sources, one of which is selectable from a drop down menu, sample start point modulation, state selectable filter, 3 envelopes, 2 LFO's with available tempo sync and a dedicated controller section.

There is also a dedicated Global and FX page that features 4 freely assignable insert slots along with master delay and convolution reverb. Each of the insert slots lets you select between one of 18 different effects including Eq, dynamics, distortion, reverb, delay and modulation FX, while the convolution reverb features 51 custom impulse responses hand crafted to compliment the included sounds. In addition to more traditional reverbs these include some pretty out there special effects like granular delays and artificial environments created by attaching contact mic's to an abused metal spring.

Felt
Each fork was struck with a felt timpani mallet at up to 15 velocity levels and 6 random-robins. These were recorded with a microphone as well as with a contact mic mounted at the hilt. The resulting sound has been pre-mixed to provide the best combination of attack with body and sustain.

CPU
Tuning forks were struck and then dragged across the top of an ancient plastic computer case creating a slightly harsh and grating sound that turns spooky when pitched down. The struck attack has been separated and can be mixed with the main sound. Up to 24 random-robins create an organic, ever changing sound.

Table (Long and Short)
Created in a similar way to 'CPU' but this time the forks were dragged across a thin plywood card table for a warmer and more resonant tone. 'Long' and 'Short' versions with up to 15 random-robins and 5 velocity levels are available, again with mixable struck attack sounds. For the 'Short version the forks were first struck and then placed against the corner of the table near the handle and then drug across it ending at the terminus of the tines. With the 'Long' version the forks were once again struck and placed on the table near the shoulder but were left in this position to vibrate and die out more slowly.

Keys
A ring of small padlock keys was hung in the crook of each fork allowing them to buzz and tingle as the fork was struck with a mallet. Captured at up to 11 velocity levels and 6 random-robins. These can then be mixed with samples from the 'Mutes' articulation from above to produce a more 'woody' sound.

Low Fork - Only samples from the lowest fork are used which are stretched across the entire range, which makes for a more compact and sizzling sound
High Fork - The same as 'Low Fork' but instead with one of the higher pitched forks used instead. Has a clattering, jangling sound at mid to lower pitches
Jangle Layers - A multilayered looping, jangling sound created by combining several of the higher pitched forks samples
Sustain - A processed, infinite sustain version of the main articulation
Reverse - Reversed samples

Turning
As it turns out, sound does not radiate uniformly from a ringing turning fork. The sound is loudest from the narrow sides of the fork along the plane that it is vibrating. Imagine a figure 8 type microphone pickup pattern but one that creates instead of receives sound and you will have a pretty good idea of the what is going on here. We were able to take advantage of this property by setting up a stereo mid-side microphone array and then striking and hand turning each fork a few inches away to create a mini, tuning fork sized Leslie type effect. Up to 6 velocity levels and 4 random-robins.

Arp 2600 Synthesizer and extra waveforms
Includes the raw oscillator sounds sampled chromatically from an Arp 2600 as well as a sine wave from a Korg Ms10 and a bonus wave captured from an Arp Odyssey.

P2P | KONTAKT | 396.91 MB Acoustic Guitar Strums is a library of just that - an octave of sampled acoustic guitar chord strums. The library utilizes a round-robin/velocity technique that captures the very essence of live strumming guitar. The velocity layers in Acoustic Guitar Strums not only scale back intensity, but also scale back the amount of notes in the chord being played at random. This...

FANTASTiC July 17 2016 | 1.01 GB JNO II is Particle Sound's next generation sampled Juno 106 instrument and takes all of the original samples and features of our popular JNO I synth and expands on them by more than doubling the core library size, adding useful new features like 2 true oscillators per layer and including the same flexible new effects architecture first introduced in Forks.... 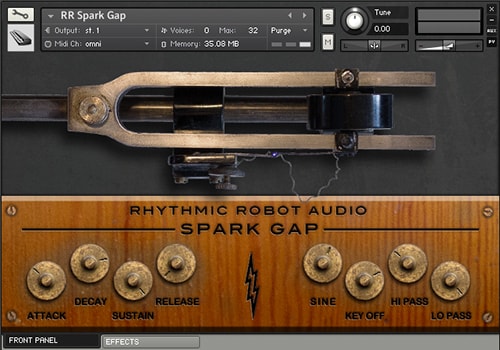 DISCOVER | 24 MARCH 2015 | 49 MB The source tones for Spark Gap come from a wonderful piece of scientific history: a vintage 1920s electrically-driven (or “maintained”) tuning fork. This bit of lab kit comprises a hefty brass fork bolted to a resonant box and fitted with a moveable pair of damping clamps plus a moveable electromagnet, and was used nearly a century ago to demonstrate the principle...

SNTHiC4TE | 30 July 2014 | 82.7 MB This is the home of the worlds first multi-sampled rare and beautiful 150 (ish) year old DULCITONE, and infact one of the few ways you can listen to what one actually sounds like. Originally designed and manufactured in Scotland in the 1800s, and with allegedly only 2000 in existence the DULCITONE is a portable keyboard that was made for missionaries to hump...