Composed by Stern Muzik, their extraordinary vision takes you on a journey into enchanted realms with 'Symphonic Series Vol 6: Dark Fairy Tales'. From the dark and sinister to the quirky and whimsical, you'll find no shortage of material to inspire your next Orchestral composition in this expertly composed and produced pack

All of the amazing live instruments found in a symphony orchestra are included in this epic pack, alongside percussions. All loops and phrases feature "solo" performances for maximum authenticity:

About Stern Muzik:
Alongside their work producing sample media exclusively for Producer Loops Limited, Stern Muzik also produces soundtracks for film, television, games and multimedia applications. They combine a deep knowledge of music, from the more traditional classical styles to more contemporary styles. With many films and musical projects scored, Stern Muzik has the experience, knowledge and emotional depth to surpass the quality of previously released orchestral and cinematic loop-based products. We are proud to work Stern Muzik on the Symphonic series, which is a large series of products dedicated to orchestral-based musical styles.

About the Symphonic Series:
The "Symphonic Series" paves the way for producers and composers of all standards to incorporate highly innovative and natural-sounding orchestral loops into their work. This series will eventually cover a multitude of different orchestral styles, and is focused on "authenticity". Watch this space as we have many more exciting titles coming soon...

Who is this product for?

‘Symphonic Series Vol 6: Dark Faity Tales’ is not just an immensely useful and inspirational tool for soundtrack, game and film composers, it goes far beyond this and is useful for producers of all styles. For example, anyone wanting to add some epic sound to their music will find outstanding inspiration here.

Hip Hop producers and Dance producers can import the OMF files into their favourite DAW or sequencer, find a hot spot, then set the locators and start working on a beat. Ambient artists may want to loop a woodwind section, pitch it down at least 2 octaves and start mixing this with time-stretched double bass notes. The possibilities are limited only by your own imagination. If in doubt, download the free pack to play around with some of the loops before you buy.

Using the MIDI files:
Want to use the exact notes of a phrase while adding some patches from your favourite synth? No problem. Thanks to our clear file-naming system you won't need more than a couple of seconds to locate and import the MIDI file representing the notes of your favourite phrase. Output the MIDI loop through your own synth, and come up with some incredible new ideas.

About Using the OMF files:
OMF format (Open Media Format) allows you to import a complete arrangement of audio loops into virtually any sequencer. Once loaded, you will see all parts on screen exactly as originally seen when exported, with chunks of audio data on separate tracks, all named by instrument. This format will allow you complete flexibility when re-mixing the arrangements.

Dry loops were used when building the OMF files so feel free to add your own reverb and/or favourite FX to a phrase, a loop or a fully orchestrated fragment. All clips (phrases, loops) carry the same name as the dry and wet loops as well as the MIDI loops which you will find in the folder structure.

By muting or soloing tracks while looping a specific section, you will soon find the exact combination of instruments you want to use for your project. Keep in mind that it might be best to use the same file-naming system when exporting your favourite sections as you may want to add or change things at a later point in your creative proces.

Please Note:
The OMF files sum up all volumes of the individual tracks while all faders are set to 0 db. Therefore, please set the master fader to around -7 db to avoid clipping and take it from there.

List of Sequencers with OMF Import:
Here is a list of all sequencers that will import the full arrangements of these kits in audio format. When you import these arrangements you will be able to see them in your sequencer as if you had recorded them yourself:

Using these OMF arrangements you will be able to (i) Re-arrange them as desired (ii) Learn how this music was put together.

5 Construction Kits containing audio loops and MIDI loops representing musical phrases
All audio loops are dry (no FX) and the same loops are also available with reverb (tail loops). All in 24-Bit, 44.1 kHz sample rate
5 OMF files containing the exact arrangements of the tracks are provided, so you can import the full arrangements into all sequencers which support this format. These files are great to be used as reference files and to export small sections you pick out yourself while having the opportunity to make your own mix before you start exporting. This format is also great for DJ's and sound designers.
All loops are royalty-free to those who have purchased the product. "Commercial use" of the five original compositions "exactly as they are in the demos" is forbidden, though. One has to make "new music" using our loops to act in accordance with our license agreement.

DISCOVER | 08 APRiL 2014 | 1.81 GB 'Symphonic Series Vol 7: Piano & Orchestra 2' is the next chapter in this epic series of high-end products bringing you five stunning & original compositions. At just over 2.5 GB of uncompressed content, you'll find unsurpassed quality and a feature set to satisfy even the most demanding producer, spread across a variety of formats including OMF arrangements.... 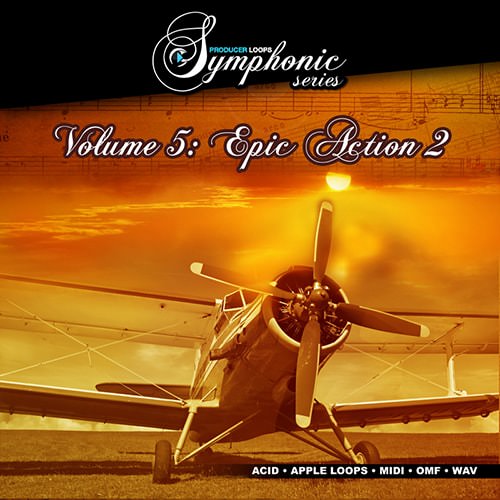