Team MAGNETRiXX | 12 September 2014 | 635 MB
'The Jungle Drummer: Urban Beats' from Loopmasters is a brand new and inspiring collection of live royalty-free beats for modern Urban producers to dice, slice and drop, suitable for Dubstep, DnB, House, Hip Hop or Funk and Garage productions. Producers will find these loops invaluable for adding realism and dynamics to every track they drop them in. Each of the Genres represented includes alternative main groove themes and multiple variations of each theme allowing producers to easily arrange the backbone of a killer drum track.

The Jungle Drummer is a dominant figure on the club and festival circuit all over the world, with live performances and DJ shows encompassing a variety of styles and genres. He has performed with award winning Drum and Bass Act London Elektricity and has worked and performed with other artists such as Rodney P and Killa Kela, Coldcut, Radiohead, Nigel Goldrich, Raw Hill Cru, DJ Fresh, Shy FX, A Guy Called Gerald, DJ FU, DJ Craze and The Scratch Perverts to name but a few.

Since 2005 he has been educating Drummers with regular sections in Drummer Magazine and the online IDrum magazine and personally through numerous live clinics, inspiring percussionist both young and old with the art of the break!

'The Jungle Drummer: Urban Beats' is a powerful collection of solid live drum grooves which cover many genres including Hip Hop, Dubstep, Breaks, Down-tempo, House, Garage and of course Live Drum and Bass.

'The Jungle Drummer: Urban Beats' is a stunning collection of rock solid breaks that will add a live organic element to your productions. If you are looking for some seriously fresh beats that marry perfectly to today’s cutting edge sounds then check out the Demo.

P2P | 07 April 2019 | 308 MB Loopmasters are proud to present Original Jungle Breaks. This is an all-encompassing set of complex and shuffling drum sections that take inspiration from the classic sounds of the 90s junglist revolution, but have been recorded and processed using 21st century techniques to bring them to the next generation of wide-eyed revellers. An added edge of this collection is...

AUDIOSTRiKE | 29 November 2014 | 1.55 GB 'Michael Schack: Hybrid Beats Session' is perfect if you are looking for next level beats to inject into your music, with maximum programming flexibility and a human feel from a drummer who knows the scene and is like a human metronome. Michael Schack is a fantastically tight and versatile drummer who plays with many artists throughout the years but is...

Team MAGNETRiXX | 14 May 2014 | 423 MB Loopmasters proudly welcome the very talented tub thumper Nathan Curran AKA Tugg the Drummer to Loopmasters for a powerful collection of Live Disco and Electro drum chops ready to drop into your House, Disco, Electro productions.... 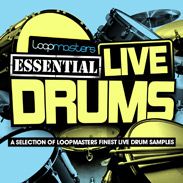