ABOUT
Tina Guo has developed an international multi-faceted performance and recording career as a classical acoustic cellist, heavy metal electric cellist, erhuist, and composer. Her distinctive sound and improvisatory style have been featured in major motion picture, television, and game scores. Taking her formal training from USC to new musical heights, she enjoys experimenting with a wide range of effects and digital processors, ever expanding upon her sound.

As Tina’s distinguishes herself most remarkably through her live musical performances, her numerous appearances on arena stages have naturally taken her around the globe to countries including Denmark, Greece, Sweden, Germany, Russia, Spain, Italy, France, Japan and the UK, among many others. She has lent her talent to live film and game attractions and television events such as the The Grammy Awards, American Idol, Dancing With The Stars, The Sundance and Tenerife Film Festivals, Comic Con and the League of Legends World Championship.

Her extensive credit list as a studio musician features acclaimed Hollywood scores such as Inception, Sherlock Holmes, and Iron Man 2. Tina’s cello work (acoustic and electric) can also be heard on major video game titles including Call of Duty: Black Ops II, Diablo III and Grammy-nominated (Best Score Soundtrack for Visual Media) Journey, to name just a few. She is also very well known for her work in television music on Family Guy, The Mentalist, King of the Hill and more, as well as various commercials for United Airlines, Mazda, Apple iPhone and more.

Tina performs on her Gand & Bernadel Cello made in Paris, France in 1880. On electric cello, she plays a customized Yamaha SVC-210 as a Yamaha Performing Artist, and exclusively through ENGL amps. Tina also plays an Erhu made in Shanghai, China.

THE PATCH
First introduced as an addition to our Artist Series: Tina Guo sound design library, the Acoustic Cello Legato patch is now available for individual purchase by popular demand! Featuring a brand new approach to legato programming, dubbed Seamless Legato, Tina's expressive solo acoustic cello performance was captured at the MGM Scoring Stage at Sony Pictures Studios and brought to you in the form of an accessible and intuitive legato patch. Tina's signature sustain sound will easily blend within your string ensemble compositions as a featured instrument, and bring a fresh voice to your section.

Upon purchase of this patch, you will receive a coupon for $99 off the complete Artist Series: Tina Guo sound library as well, if you choose to expand your Tina Guo sound palette tenfold!

CINESAMPLES' ADAPTIVE LEGATO ENGINE - NEW IN v1.2!
Cinesamples applied the legato engine from CineStrings SOLO True Legato patches to Tina Guo Acoustic Cello Legato. It allows you to tailor the legato response to your own playing style, and is designed to respond musically to your performance. The engine detects your playing speed and intelligently adjusts the interval speed to match. This means you can play slow, expressive lines and fast runs in a single performance, without touching the speed dial. Additionally, the intensity parameter responds to velocity.

The update includes our Adaptive Legato scripting feature, which adjusts the Speed and Intensity of the legato transitions between notes to better match your performance. 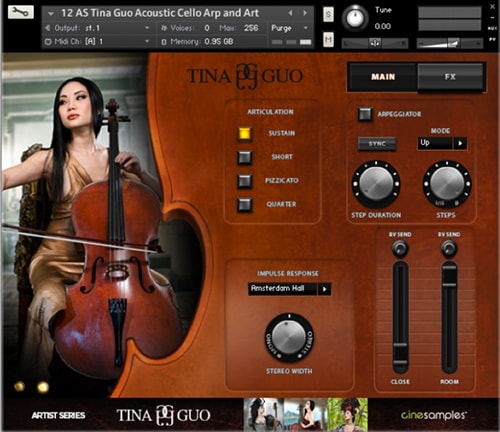